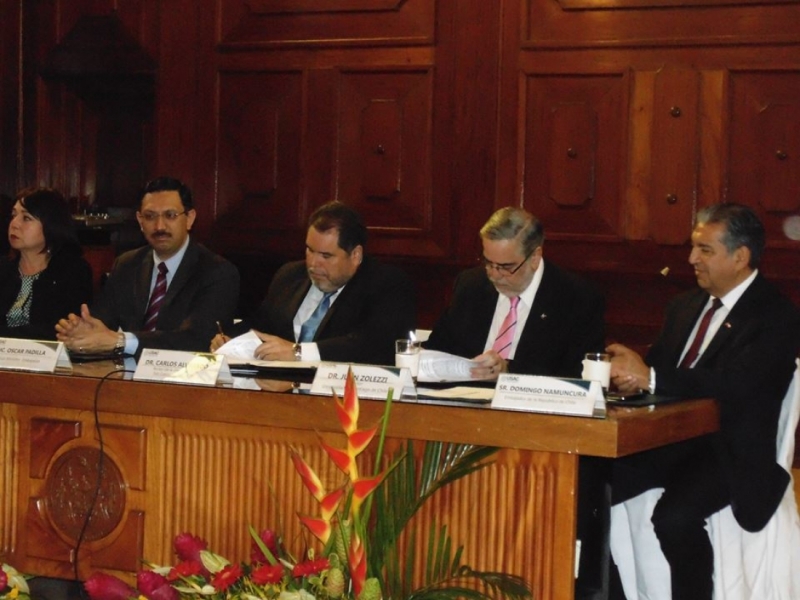 380. BILATERAL RELATION BETWEEN CHILE AND GUATEMALA

Located in South of America, the Republic of Chile is a country that in the last decades has managed to redouble efforts and to take advantage of the opportunities making it one of the most developed in the American continent.

Chile has made significant progress in the quality of education, innovation, science and technology, influencing in the productivity of the country.

Recently, a delegation of the Santiago of Chile University came to Guatemala - USACH, with objective to sign a cooperation agreement with the University of San Carlos from Guatemala - USAC, which it encompasses cultural and scientific collaboration.

Also includes exchanging students, exchanging knowledge, academic exchange and in a future it could be worked projects of degree, doctor's degree in science in conjunction.

This delegation is leaded by the rector Juan Manuel Zolezzi Cid and 17 deans of the different faculties that integrate the university.

Previously to the signing of the agreement, a year before was initiated the strategy, made by Miss Guisela Godinez Sazo, Embassador of Guatemala in Chile, Mister Domingo Namuncura, Ambassador of Chile in Guatemala and the University of San Carlos of Guatemala.

Guatemala and Chile has diplomacy relations since 175 years ago, which are actually in their best moment, proof of this is the near diplomacy, academic, friendship and commercial relations, it has been of the strengthens this diplomacy has take advantage, in this time, with the presence of the academic mission of the prestigious University of Santiago of Chile.

It is also important to mention that in the year 2014 came to Guatemala the President of Chile, Miss Michelle Bachelet, this is another proof of the good relation between the Chilean and the Guatemalan People.

Also, last year there was a mission from Guatemala to Chile, with the objective to set up an exhibition of the traditional costumes of Guatemala in the University of Santiago, which encourage a lot the distinct actors of the college community.

379. CULTIVATION OF MORINGA, FOOD SECURITY 381. TECHNOLOGICAL INNOVATION FOR THE WORLD